History of Sixteenth Church of Christ, Scientist, of Chicago

Sixteenth Church has been a home and haven for many generations of Christian Scientists over 100 years. It exists to glorify God, bless humanity, and adhere to the vision and demonstration of its divinely inspired and guided Discoverer, Founder, and Leader, Mary Baker Eddy. It says to one and all: “Come, ye blessed of the Father, inherit the kingdom prepared for you from the foundation of the world.” (MATT: 25:34)

Our church was established in 1914 after members of Seventh Church of Christ, Scientist, of Chicago, living in Rogers Park, decided to form a Christian Science church in their own neighborhood. A Reading Room was opened, and they held services at locations in the area, including the old Birchwood Country Club, the Armstrong School, the Masonic buildings, and the Rogers Park Women’s Club.

The members broke ground for a church building in 1922 at the corner of Touhy and Ashland avenues. In 1924 they began services in their new Greek-style building and dedicated their church in 1929 free of debt. Sixteenth Church grew and prospered during the Great Depression, and in World War II participated actively in Christian Science wartime activities.

During the 1970s, it became evident that a new church edifice would better meet the needs of the current membership and its desire to more actively share Christian Science with the Rogers Park community. Inspired outreach activities, spiritual vision, and working in unity to demonstrate a more progressive sense of church resulted in growth, along with unsolicited offers to buy the church edifice.

In 1980, the members of Sixteenth Church sold their edifice to another Christian denomination and moved their Sunday services and Wednesday meetings to the North Shore School (formerly the Birchwood Country Club). In 1983, the church purchased property at its current location on the corner of Ridge and Greenleaf avenues. Ground was broken in 1984 and the church held its first service in the new edifice on the eve of Thanksgiving 1985. The edifice was dedicated a year later.

Sixteenth Church continues to keep pace with the times, maintaining and demonstrating its tradition and heritage of Christian Science healing and service. The true sense of church dedication is found in the hearts of its members and friends, not in a material structure. It is found in their love for God and man.

Gratefully and humbly we consecrate ourselves to the vision of the Founder of Christian Science, Mary Baker Eddy, who followed the leadings of God to give us “a church designed to commemorate the word and works of our Master [Christ Jesus], which should reinstate primitive Christianity and its lost element of healing.”
(MANUAL OF THE MOTHER CHURCH BY MARY BAKER EDDY) 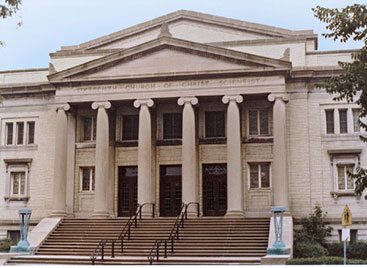 “Come, ye blessed of the Father,  inherit the kingdom prepared for you from the foundation of the world.” 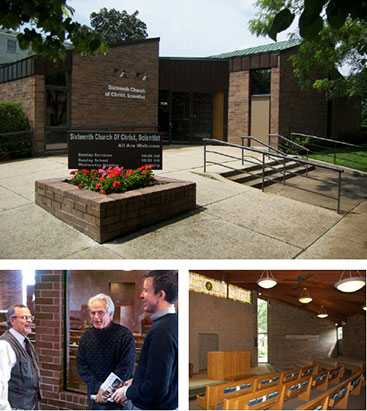